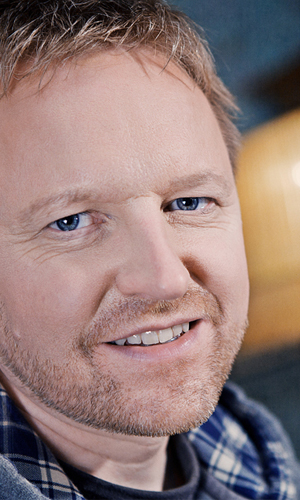 I was born March 13, 1962 in New York and moved as a two-year-old to Finland with my parents who returned after many years in the United States. The home was always filled with music as my mother is a singer. My father played the accordion just for the fun of it. My mother engaged me and my brothers at an early age to play in different choirs and my parents also tried to inspire me to take piano lessons. So I did even a few years, but thought the guitar was a lot cooler instrument. My brother played the piano and my youngest brother took care of the drums.

Like many young people in Närpes I also played in “Närpes skolmusikkår” for a few years. First trumpet, but the conductor had a lack of trombonists and persuaded me to switch instrument. I thought the brass band was a little boring so I sticked to the guitar at home. From the guitar I went to the bass and the bass became the instrument I seemed to enjoy the most. Since we lived in the country, there were not very good opportunities to get musical courses so I had to cope on my own.

At age 20, I put all the music activity on the shelf and started studying in the medical field, started my business career and my own family, but noticed that I missed the music in my life. While I tried to survey without music I encouraged my own three children to an active musical life, and through them my interest for music started to grow again. I started to sing in a barbershop quartet and later in a double quartet. Here the music also gave me a social dimension. We were engaged in Närpes Skolmusikkårs big shows, and got to perform with different artists to a large audience.

I began to play the piano and explored nice harmonies. At the same time I started to hum melodies and then wrote a lyric to the melody. I had written my first song!

The interest grew and I took some sporadic piano lessons. My daughter’s clarinet teacher “forced” me to present one of my own songs in a student concert and she encouraged me to do something more with my music.

Through the Swedish Cultural Foundation, I got grants to do a demo with three songs 2005. I sent this to a competition under the pseudonym “Ruben” (the name of our dog). To my surprise, I won the first prize with the song “En Vind”. I got the opportunity to perform at the song festival and had professional musicians backing me up. This of course encouraged me further. At the festival I met producer Åke Grandell and he was interested in me and offered to help me further. We decided together to make my first CD.

My first full length CD Tänk Om … was released in 2006 and received very positively critics. The radio noted my songs and I got into Yle playlists. This inspired me to continue writing and composing.

In the summer of 2007 I did a summer tour in the Aland archipelago, along with my musicians. We got to test my songs for a very diverse audience and we received very positive feedback. This encouraged me to continue to make more music.

In autumn 2007 I started my second CD project with Åke Grandell as a producer. The CD Tystnad was released in 2008. The lyrics were a little more philosophic and I had managed to create a more personal touch to my music. Also this time I managed to get several songs on the YLE playlists.

In touch with other musicians, I decided to start my own “Live Band”. I fell in love with a new acoustic guitar and got new inspiration and also a different sound on the songs.

In 2009 I decided to produce a CD thru my own company DavidMusic. I released the first single Lilla Människa in May 2009 and Snart 50 in September 2009.

My third CD, “Lilla Människa” was released in 2010 by DavidMusic.

In 2011 I cooperated with my pianist and arranged five of my songs for a choir. In May 2011 I also released the single Sol och Sommar and soon after Vardagsängel wich became a very popular song. My cooperation with Paul Oxley and Janne Hyöty resulted in a new EP Simplicity 2013. This is my first recordings in english. We also produced a music video Long Time Coming for the first single.

2014 i started a new project for a coming album in swedish. My new single “Tysta rum” was released in January 2014. This is a cooperation with my musicproducer Janne Hyöty. We also have a music video with beautiful pictures from the finnish nature. All pictures are taken by Mårten Sjöblom. During the time in the studio I also wrote “Orkar än” . It´s a little different happy song that I also made a video for.

My new album “Simma motströms” is released in August and I am also touring with my band during the fall. We have a interesting cooperation with bishop Björn Vikström and Församlingsförbundet in August -September. We are visiting places in Finland and presenting our new album.

Simma motströms is a album where I wrote about silence, simplicity, patience – things that is more or less forgotten in our society of today.

Please have a listen and a look!
I hope you will like my new songs!